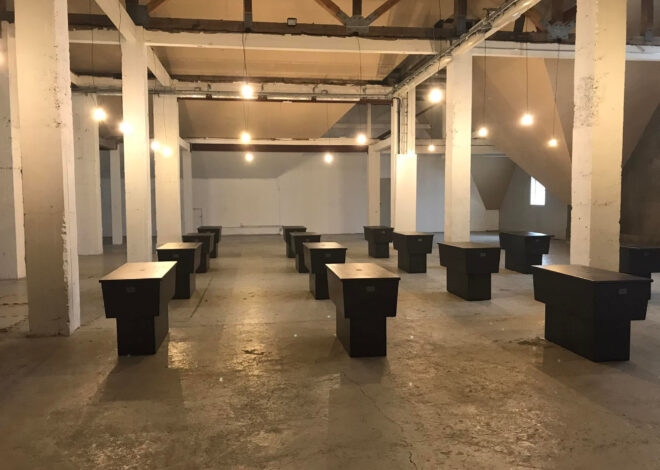 Two important and timely works by Rúrí that speak to the devastations of warto be shown at Hlöðuloftið, Korpúlfsstaðir, Reykjavík, Iceland. From April 23 to May 15, 2022, two works by the Icelandic artist Rúrí will be shown in the main exhibition space at Korpúlfsstaðir, organized by SÍM: Samband íslenskra myndlistarmanna / The Association of Icelandic Visual Artists.

The present conflict in Ukraine is once again a reminder of the devastating impact on humanity and the threat of nuclear war. Two works from the artist Rúrí’s archive poignantly address these subjects, statement on how easily progress toward peace can be undone.

Museum (1987) was created in the year that US President Ronald Reagan and the President of the Soviet Union Mikhail Gorbachev signed the Intermediate-Range Nuclear Forces Treaty (INF Treaty), the initial talks for which were held in Reykjavík in October, 1986 . The installation comprises 15 boxes that take their shape from chests commonly found in family homes that might contain objects of sentimental and investment value. As the title suggests, the boxes reference display cases found in museums and archives, into which objects of importance to culture or civilization might be held for safekeeping or put on display for the benefit of celebrating intellectual, creative, or historic achievement.

In Rúrí’s museum, assemblages of items collected over a ten-year span, from places specific in their geographical location and nonspecific in the randomness of their selection, point not to objects of personal, cultural, or historical significance, but rather to the banal and mundane reality of everyday life. Taken together, the displays of precisely arranged things — documents, timepieces, tools — ask us to imagine a moment at some point in the future, the Earth uninhabited by humans, when some other beings might look upon the detritus left behind to decipher who we were.

Elegy (2000) is a single-channel video documenting visit to Kroatia, Bosnia Herzegovina and Serbia in the beginning of 1998. The aftermath of the war or armed conflicts is everywhere when the camera travels through streets and ruined buildings.

In a career spanning more than five decades, Rúrí, one of Iceland’s preeminent artists, has centered her artistic practice on dealing with moral issues of inhumanity and existential threat, in works that confront imperialism, capitalism, social injustice, and environmental destruction. A pioneer of performance art in Iceland, Rúrí has worked in a wide range of mediums, including painting, sculpture, writing, photography, film, multimedia installations and performance art. Her groundbreaking performance Golden Car (1974), was one of the first works in Iceland to engage in political activism. She represented Iceland at the 2003 Venice Biennale with the work Archive-Endangered Waters, an interactive multimedia installation made up of visual and acoustic data on 52 waterfalls that had disappeared or were threatened by the construction of a dam in the Icelandic Highlands. The piece brought her international acclaim.

Curator Pari Stave is the incoming Director of Skaftfell Myndlistarmiðstöð Austurlands | Center for the Visual Arts, in Seyðisfjörður. She was formerly the Senior Manager of the Department of Modern and Contemporary Art at the Metropolitan Museum of Art, New York.

*The exhibition title is a reference to Völuspá an epic poem related to Old Nordic mythology.