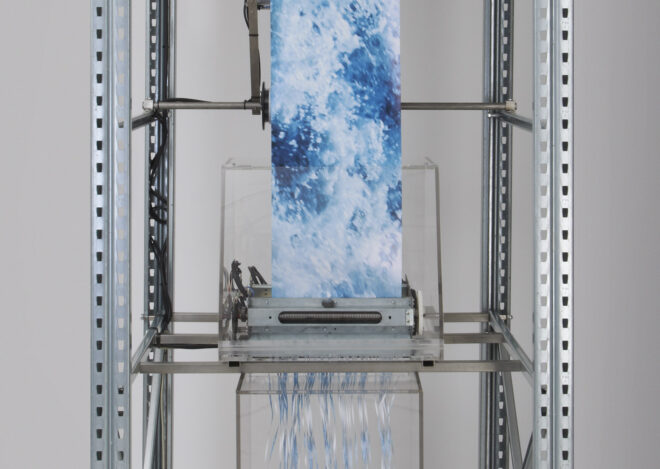 In 2008 Rúrí took part in an exhibition in Akureyri in the shadow of the economic collapse which took place that year—and which may partly be ascribed to the economic expansion which arose from the Kárahnjúkar hydro-electric plant. She showed Tortími/Termining  (both Icelandic and English words are coined by her). The Icelandic title is a punning conflation of tími  (time) and tortíming (destruction), with connotations of hard times and destruction. The piece is a mechanical construction which may be seen as symbolizing the way that modern technology shackles nature. Inside the mechanism is a strip of paper seven meters long on which is a picture of Töfrafoss (“Magical Falls”), one of the waterfalls which vanished when land in the uplands was submerged by a reservoir for the Kárahnjúkar hydro plant. When someone approached the piece, sensors activated the machine, the strip of paper rolled downwards into a shredder, and the shredded remains of the waterfall were caught in a transparent plexiglas box. The movements of the mechanism were random, so it was impossible to tell whether the machine would be activated, and how much of the waterfall would be shredded. Hence the observer could not tell what the consequences might be of approaching and looking at the work. 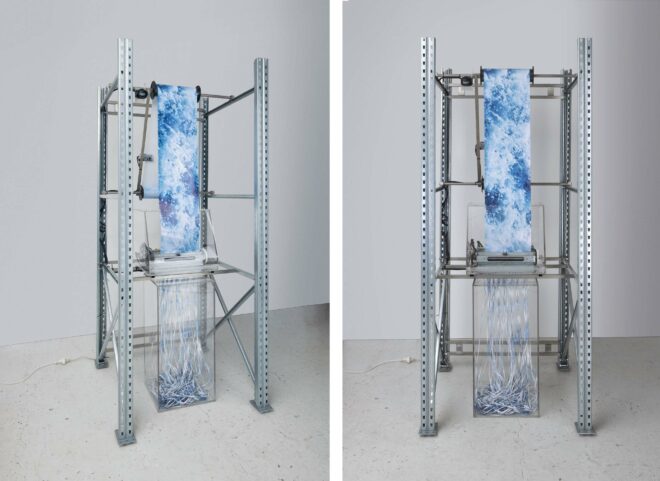